Having lived in Africa for quite a few years, I was a bit torn with this film. Overall it was an enjoyable experience, but it wasn’t perfect in my opinion and while its popularity cannot be denied, there were definitely issues with it in my opinion.  The Marvel Cinematic Universe (MCU) really showed their creative genius with the backstory of Wakanda, a mythical nationalist African state ruled by a monarch. King T’Challa, played by Chadwick Boseman, holds the Black Panther title, a role he had trained for since childhood. He rules supreme over Wakanda, a walled and isolated country which is the sole possessor of Vibranium.  Black Panther is challenged by Erik Killmonger, played by Michael B. Jordan, his cousin and eligible heir who disputes the country’s isolationist policies. The movie is action packed with awesome sci-fi tech and weapons although the humor is a bit forced and doesn’t blend in as well as in other Marvel movies.

For centuries, Wakanda has been closed off from the rest of the world as it is fully walled off, doesn’t accept immigrants or refugees, has stayed uncolonized and is completely composed of black Wakandan citizens. Vibranium is a revolutionary technology harvested from a meteorite and is used in making weapons and armored vehicles, but the Wakandans aren’t sharing it with other countries.

The film also has a huge presence of black people and women who are usually supporting characters in other Marvel superhero movies. Black Panther has set off the alt-right group who are using it as the latest example of how Hollywood is trying to force SJW agendas down their throats. Leftists, on the other hand, are elated about how the movie embraces diversity, African-American pride, and blabber on about how Wakanda is the epitome of a fully-fledged Trump-style administration. Basically, it has all the ingredients needed to spark a national debate and generate hype for a long time to come. In fact, it is already the all-time most talked about movie on Twitter. But see, that’s where I have some issues. I’ve lived in Zambia and Zimbabwe and the portrayal of Africans as monolithic is something I can’t really get behind. They talk about and show other African nations as poor and downtrodden (and they are) but they have some decent cities and South Africa especially has cities on par with anything in the Western World.

First off, this is the first Marvel movie in ten years to feature a non-white male lead actor. It is a good sign of things to come, and we can expect more of this from Marvel. Secondly, Wakanda represents a powerful nation with a rich African heritage that is untouched by Western influence.

The director, Ryan Coogler, gives King T’Challa an African accent and N’Jadaka/ Killmonger is given an American accent to show the animosity between Black-Americans and Africans. It is interesting how local conversations are done in Xhosa, a South African dialect, yet Wakanda is located somewhere between the D.R.C and East African countries. Kiswahili, Kikongo or Lingala would have played right into the geographical position.

Upon King T’Chaka’s death, T’Challa returns home to claim the throne and pulls out his ex-lover Nakia (Lupita Nyong’o) from an undercover operation to attend his coronation ceremony. Nakia’s mother Ramonda (Angela Bassett) and T’Challa’s younger sister Shuri (Letitia Wright) are also in attendance. Erik Stevens and Klaue steal a Wakandan aircraft from a London museum, and W’Kabi (Daniel Kaluuya) who is T’Challa’s best friend and Okoye’s (Danai Gurira) lover convinces the king to take revenge. Later on, King T’Challa is challenged by M’Baku (Winston Duke), leader of the Jabari tribe, to customary hand-to-hand combat for the crown. M’Baku is defeated, but his life is spared; he repays this gesture by providing refuge for Shuri, Ramonda and healing T’Challa when he was fatally injured. 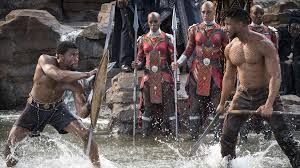 The main antagonist, N’Jadaka, who is opposed to Wakanda’s customs, is willing to share Vibranium with outside forces including Ulysses Klaue. Ryan Coogler, however, missed the mark when he portrayed him as a pro-imperialist character who signs up for the U.S. Special Forces to fight in the Middle East. Although this is explained as N’Jadaka’s strategy to get combat training and challenge the Black Panther, it just doesn’t cut it. Killmonger comes off as a tragic hero and a victim rather than a ruthless and scary villain. To give him credit though, he plays the part well; a villain who has a personal agenda against the hero and not some crazy world domination scheme like Bond villains.

Pitting a black superhero against his kin (literally) dismisses the rhetoric of black-good, white-bad that was expected by most. There is also the issue of Marvel’s ambiguity about the capabilities of Vibranium which according to them can be used to create almost everything. Forest Whitaker (Zuri) dies too soon without establishing any real connection with the audience or even King T’Challa for that matter. Additionally, not much was shown about the Wakandan’s way of life or where they stand amidst the conflict since most of the film focuses on the main characters. Coogler really missed the mark with the whole “American colonialists” thing since the U.S. was never a colonial power.

We had previously been introduced to the Black Panther and Wakanda from Captain America: Civil War when he seeks revenge against the orchestrators of the bombing that killed his father. This is good since the story is familiar and interconnected with other events on the Marvel Cinematic Universe (MCU). As previously highlighted, Coogler needed the Black Panther to have an African accent to bring out the African roots and background. Chadwick Boseman does his best on the accent, but it removes emphasis on some lines and doesn’t deliver them effectively. Killmonger is also more intimidating when quiet than when speaking since his lines are not well written and don’t pack any punch. It is a little underwhelming especially considering Jordan’s prowess in earlier films like “The Wire”.

There is a considerable amount of hand-to-hand combat, and the action scenes are on point. The movie is chock full of CGI and special effects which has sci-fi fans going bananas. However, Marvel is flogging a dead horse with their good-guy-in-suit vs. bad-guy-in-identical-suit fight which is almost the fifth time we are seeing it from MCU.

Shuri is excellent in combat, and her sword-wielding skills from The Shannara Chronicles are well used. We also get to see the Black Panther chase after cars and blow them up for the second time after the first time in Civil War. All in all, it is a gripping movie that is well laden with humor, action and emotional scenes to keep you on the edge of the seat for the whole screening. I’d give it an 8.5 out of 10 for the fusion of multiple concepts in a new type of superhero movie that we aren’t accustomed to.

Two words anime fans will always find themselves being called are weeb and otaku. Let’s look at what exactly these terms mean and whether they are being used in good faith or as a slur.

The right way to watch Anime

Having lived in Africa for quite a few years, I was a bit torn with this film. Overall it was an enjoyable experience, but it wasn’t perfect in my opinion…

The right way to watch Anime

The Terran Privateer – Book One of the Duchy of Terra